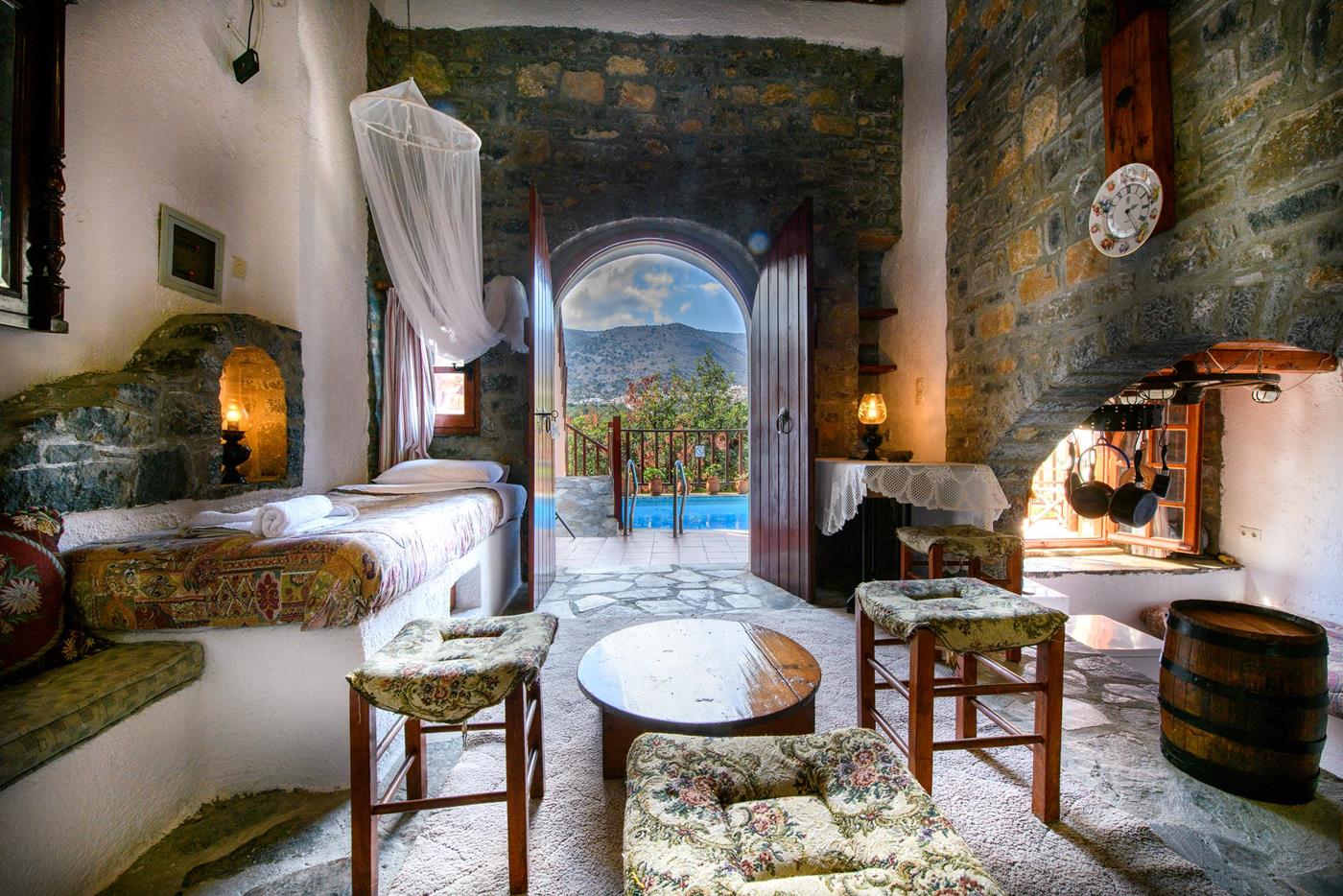 In the entrance terrace, there is a pool and a summer kitchen with BBQ shared with the House of CLIO.

On entering, the Home there is the main room with fireplace and two single beds, a fully equipped kitchen and a small bathroom with Jacuzzi. Up the stairs to the master bedroom with an old double bed c 1920 and lamps which belonged to the church when intact. Cartwheels dating back to the beginning of the last century have been transformed into the main lighting. Kitchen utensils are copies of originals and the plates are of a type still in use in most villages of Crete.

The House can accommodate four adults in separate rooms.

Furniture and fittings are copies of original pieces presently exhibited in the Historical Museum of Crete in Heraklion.

There is evidence handed down through the generations that there was a church on this site many years ago.

Location: The beach is located 10 minutes walk away and about the same for the village of
Elounda, about 1 kilometre.

The history of the house 'ERATO'

The Venetian occupation of the island ended in the 14th century when Ibraim Pasha, acting as Supreme General of the Ottoman Empire, took possession. For 400 consecutive years, Crete suffered the Turkish suppressive occupation. Contrary to the Venetian occupying forces, who promoted free language and religion, the Turks prohibited both. For the entire period of Turkish occupation Language was taught in 'Secret Schools' and Religious rites were observed in small obscure Churches scattered in the mountains. When these Houses were under construction, a fascinating discovery was made.

An iron Christian Cross wrapped in a cloth was found within a wall as well as a number of Icons. These Icons are now, prominently displayed on the same wall in the Houses of EFTERPI and DIMITRA. Legends handed down through the generations have told us that on this site was a prominent Church dedicated to PROPHITIS ELIAS (the Prophet Eli), which had been constructed long before the Venetian period. It is probable that the Church being on the top of a hill overlooking Elounda/Elous, had served the Religious needs of the inhabitants of the region. The Church was burnt down and destroyed, by the Turks, at the beginning of the 15th century and was never reconstructed. A new, but smaller Church dedicated to PROPHITIS ELIAS, built in 1950, can be found just 50 metres away.

No engravings of the original Church have been found. The site came into the possession of the Mavrikakis family, who were the first to settle in the area, which in turn led to the village being named Mavrikiano. Descendants of the original family sold this property to ANEMOS LTD in 1999, who undertook the reconstruction with reverence to its history and the environment.

Dear Guest,
You are indeed living in a Church and we trust that this will
be an unforgettable experience!

Google Map & How To Get There:

To join our private club, enter your name and your e-mail and press JOIN.

If you wish to invest in Crete's properties, please feel free to inquiry about residences or plots available for sale; We can offer proper advice for properties with development potential and share its contacts to facilitate a smooth transaction.